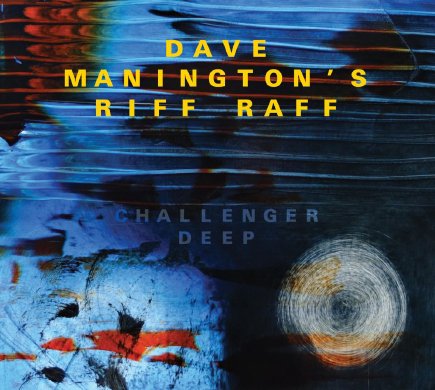 Challenger Deep is Dave Manington’s 3rd album as leader and his most ambitious to date.

The music is sophisticated and full of virtuoso playing, sometimes freely improvised with an exciting element of risk, but the song forms, melodic nature and the empathy and great ensemble playing of the group make it highly accessible.

“It also grooves like hell, with some thick mercurial riffs – full of stops, starts, and turns yet rocking in the grip of a savage momentum.” JAZZWISE.

“a fine album which reveals hidden depths the more one listens to it.” - Bebop Spoken Here.

Grab your copy over at bandcamp
Purchase Challenger Deep

DR. OCTOPUS is my tribute to Joe Zawinul and Weather Report, which is one of my favourite bands and a big influence on me in my formative years. I still find it incredible that Zawinul could play so many different keyboard parts at once so I’ve decided he must have had eight arms – like the baddie from Spiderman.

CHALLENGER DEEP is the deepest ocean trench in the world, nearly 11km down at the bottom of the Pacific Ocean. This is more of a mood piece, with the low bass riff and slow otherworldly melody trying to capture the strange beauty and calm of the deep ocean. Imagine all the weird fish and creatures unknown to science swimming past in the darkness. Tom was very pleased I wanted to name the tune and album after him, but it has nothing to do with his deep saxophone playing or the fact that he’s deeply challenging – although perhaps the HMS Challenger was named after one of his ancestors?!

THE ILIAD is a bit of an epic, written in several contrasting sections. I would have named it The Odyssey but Spinal Tap already used the name Jazz Odyssey, as did several dodgy 80s jazz albums I used to own. I like to take the listener on a journey, to tell a musical story.

FREE SPIRIT is one of the most direct, uncomplicated songs I’ve written, and I decided not to bow to the temptation to overarrange it. Brigitte compliments the tune with her own fantastic heartfelt lyrics, as she does on several other pieces on the album.

PRIME NUMBERS is based on a sequence of seven bars of 7/8. Also containing plenty of groups of 3s and 5s.

RANDOM ACTS OF KINDNESS was inspired by a blog written by a chap who set out to inflict acts of kindness on a someone different, every day for a year.

DANGERPIG is dedicated to my kids James and Freddie. They used to have a game which involved throwing themselves headlong off the sofa onto a pile of cushions. They had superhero alter egos which they would scream out at the top of their lungs – Freddie decided to call himself Dangerpig. We still play this game occasionally when it’s wet out.

Dinosaur love song THAGOMIZER was written for my kids when they asked me to write a tune about dinosaurs. I agreed because I feel dinosaurs are badly underrepresented in jazz these days. As everyone knows, a thagomizer refers to the spiky bit on the end of a Stegosaurs’ tail which it presumably used to fend off attacks from Tyrannosaurus rex. Brigitte rose to the challenge to write lyrics about this prickly subject matter and perhaps some more modern issues as well.

WILLOW TREE is a simple ballad in 5/4. I wrote some simple bass chords, but the song really came to life when Brigitte added her beautiful melancholic lyrics, and Tom his fantastic quirky saxophone solo.